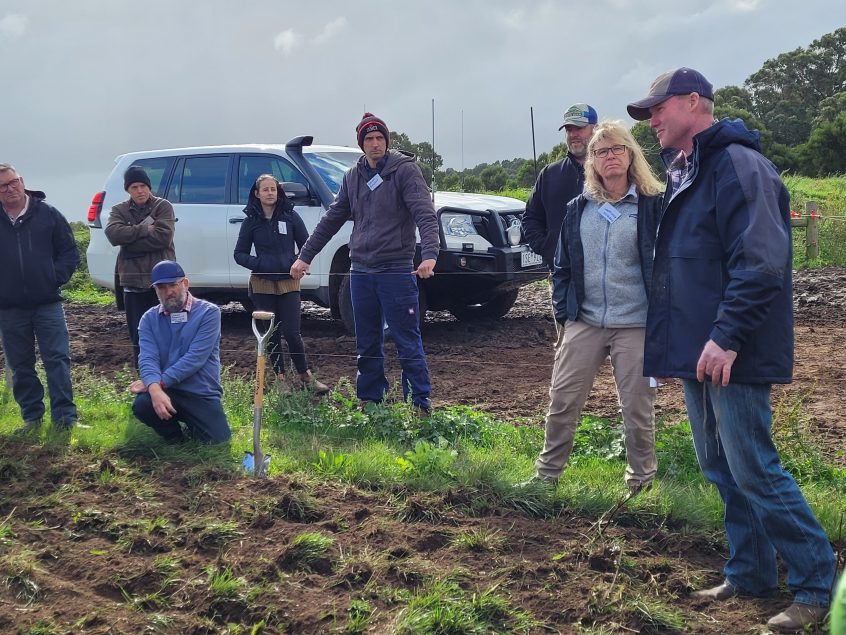 Not everyone gets to do what they love every day, but that’s not the case with Linda and Andrew Whiting. And they are happy to share a journey which has left them grinning from ear to ear.

Following the winding roads inland about forty kilometres from the Twelve Apostles on the Great Ocean Road, we find the Whitings’ dairy farm a hive of activity. Andrew and Linda’s children are busily preparing the yard for the visitors arriving the next day. Linda is milking and we find Andrew walking through his vibrant green pasture paddock behind the calf shed.

The Whitings are preparing for a Biological Farming Roundtable at their undulating property just out of Simpson, a region with high rainfall and well known for dairy production. The event is sponsored by NutriSoil, who produce, manufacture and distribute a biological worm liquid, and they have brought  agroecologist David Hardwick from Soil Land Food with them  to facilitate a presentation on the role of soil type, soil structure and soil fertility in a healthy production system.

Andrew takes the team for a drive through the immaculate property, which has been deliberately fenced into evenly sized paddocks for grazing management, ensuring his multispecies pastures are productive and contributing to the overall health of his soil. 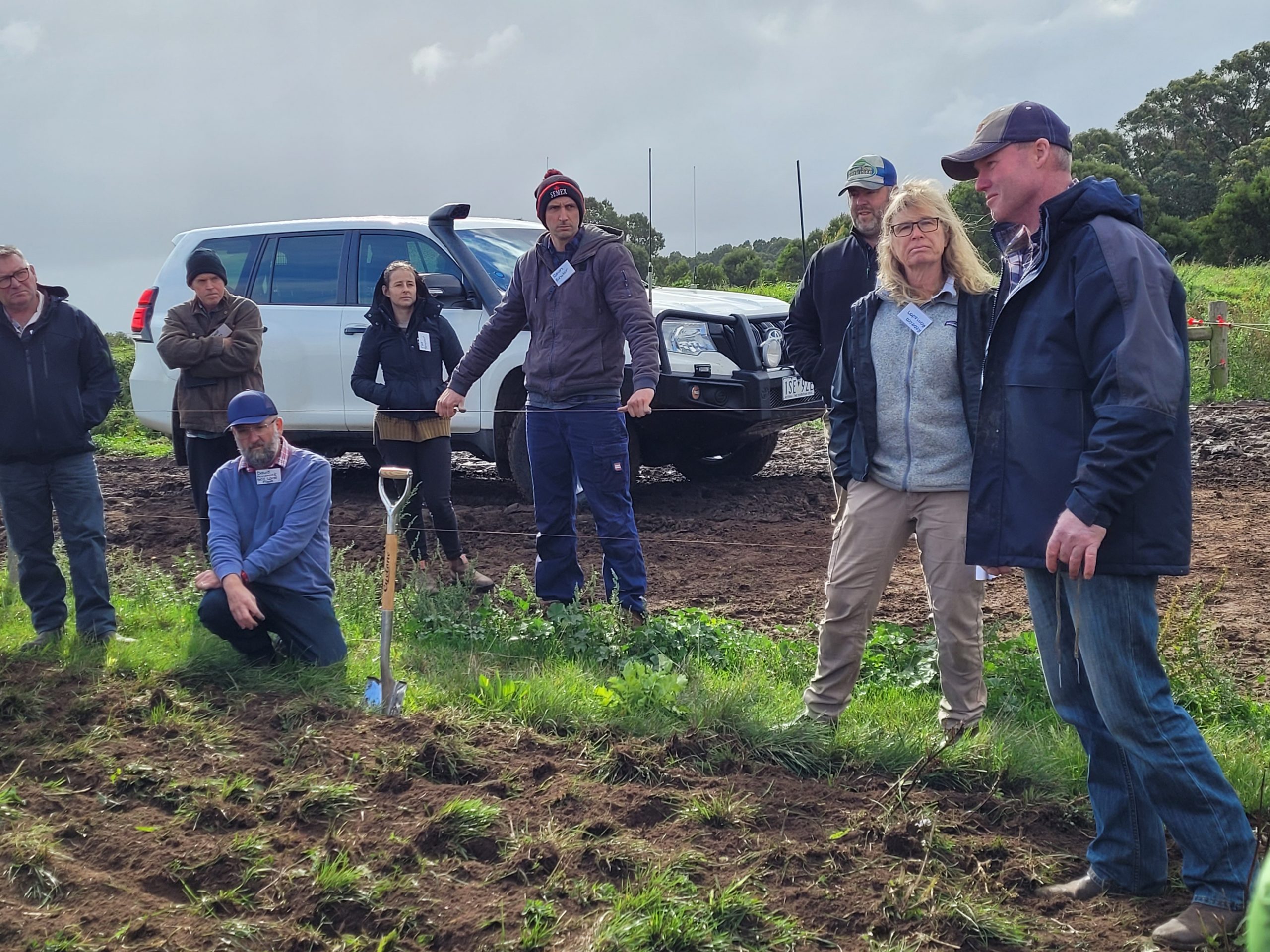 Andrew hasn’t stopped smiling since we got in the car and it is obvious this is a proud, relaxed and happy farmer who is confident with his farming system which has evolved over the last 15 years through a commitment to a focus on their core business, milking dairy cows.

Nakala Maddock, director of NutriSoil, asks Andrew if there is anything that “keeps him up at night”. He pauses briefly before replying with a cheeky grin, “too much nitrogen”.

The following day in the Whitings’ hay shed 40 farmers from as far away as Gippsland and South Australia listen as the Whitings explain their journey to a biological system which is predominately synthetic input free. The only herbicides used on this property are for spot spraying thistles and blackberries.

Andrew tells the captive audience that despite reaching industry production goals the couple felt frustrated their money was going around in circles, his soils were not improving and during a dry summer his farm was the first to dry off even though he produced the most feed.

So, the Whitings decided to try something different after a chance encounter with Tony Evans from Camperdown Compost Company – they began making their own compost. Andrew readily admits there have been trials and errors along the way, but their focus on the core business of milking has allowed them to develop a simple low risk system which has cut out the jobs they don’t like.

They advise those considering the next step in regenerative farming to educate themselves, understand their own farm, their own soil and don’t just do what the neighbour is doing. Start small and conduct trials until you work out what works for you.

The Whitings are soon taking delivery of a SoilKee for sowing directly into their perennial pastures, allowing them to sow when it suits them. They believe the addition of a Soilkee will suit the wet winter climate, helping to unlock nutrients created by the biological system they have created.

Readily available nutrients in this simple system will be the last piece of the puzzle the Whitings believe is missing to help them with their goal of two tonnes to the hectare of dry matter per 100 ml of rainfall.

The Whitings are passionate about bridging the gap between gumboot agronomy and soil biology so that more people have the confidence to take control, create healthy systems and increase production.

Join NutriSoil host, Nakala Maddock, as she interviews regenerative farmers that are turning the tides in agriculture by reducing chemical inputs, rebuilding nature’s natural solar, mineral and water cycles and returning nutrient integrity back into the food chain. Listen to Podcasts

Thanks to Border Tanks and #PioneerWaterTanks for their ongoing support and service!NutriSoil is a biological liquid stimulant that is organically certified, award winning, concentrated worm liquid, produced from a unique Vermiculture Recycling System 🌱♻️It’s a family business started by Graham and Lyn Maddock in 1995, now managed by their son, Darren, and one that requires large storage tanks to feed their composting system.Needing more storage and flexibility, the team approached Pioneer Dealer Direct Network® member Border Tanks to install 2x 250,000L. This adds to 2x existing Pioneer tanks that were installed in 2008 by the same company – the key reason why Darren went back to Pioneer 💧“I decided to stick with what I knew and continue using a brand that I know for a fact is durable and sustainable.”Learn how the business creates their biological liquid fertiliser using Pioneer tanks 👉 bit.ly/30RH404#PioneerWaterTanks #LeadingTheWayInWater #tanksPioneer #NutriSoil ... See MoreSee Less

It was great to have the Joey's from the local Scout group at #NutriSoil last Tuesday evening. The Joey's got a tour of the worm farm and some of the behind the scenes action! ... See MoreSee Less

Give the gift of healing this Christmas! One of our customers is sending 2L of NutriSoil to family members this year, NutriSoil are including free gift wrapping.What a better way to celebrate the spirit of Christmas than healing the planet! $26 delivered and wrapped.Check out how to order www.nutrisoil.com.au/order-now/ phone us directly on 02)6020 9676.#soilhealth #NutriSoil #Christmas21 ... See MoreSee Less

See the results for yourself!

NutriSoil is giving away a FREE promotional
2 Litre starter pack. 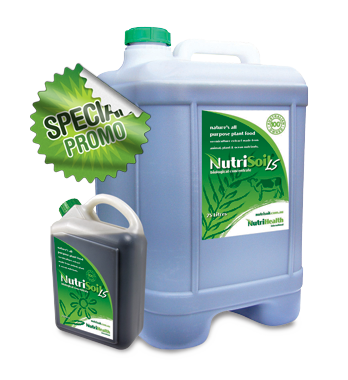